When was the last time you had a conversation with someone specifically to win them to Christ? As Christians, we need to get into the habit of preaching the gospel to those around us. Unfortunately, many churches are filled with people who don’t do much when it comes to evangelism. Let’s read the parable of the Fishless Fishermen’s Fellowship.

The fishermen were surrounded by streams and lakes full of hungry fish. They met regularly to discuss the call to fish, the abundance of fish, and the thrill of catching fish. They got excited about fishing. Someone suggested that they needed a philosophy of fishing, so they carefully defined and redefined fishing. They also developed fishing strategies and tactics. They began research studies and attended conferences on fishing. Some traveled to faraway places to study different kinds of fish with different habits. A few even got doctorates in fishology, but no one had yet gone fishing. So a committee was formed to send out fishermen.

As prospective fishing places outnumbered fishermen, the committee needed to determine priorities. A priority list of fishing places was posted on bulletin boards in all the fellowship halls, but still no one was fishing. A survey was launched to find out why. Most didn’t answer the survey, but from those who did, it was discovered that some felt called to study fish, a few to furnish fishing equipment, and several to go around encouraging the fishermen. With so many important meetings, conferences, and seminars, they just simply didn’t have time to fish.

Now Jake was a newcomer to the Fishermen’s Fellowship. After one stirring meeting of the fellowship, he went fishing and caught a large fish. At the next meeting, he told his story and was honoured for his catch. He was told that he had a special gift of fishing. He was then scheduled to speak at all the fellowship chapters and tell everyone how he did it. With all the speaking invitations and his election to the Board of Directors, Jake no longer had time to go fishing, but soon he began to feel restless and empty. He longed to feel the tug on the line once again. So he canceled the speaking, he resigned from the board, and he said to a friend, “Hey, let’s go fishing.” And that’s exactly what the two of them did. Lo and behold, they caught fish.

The members of the Fishermen’s Fellowship were many, the fish were plentiful, but the fishermen were few. In Mark 1:17, Jesus said, “Follow me and I will make you become fishers of men.” When it comes to evangelism, are you a fisherman who doesn’t fish? If that’s the case, don’t be afraid to follow Jesus. You can trust Him. He will make you a fisher of men.

Emeal (“E.Z.”) Zwayne presents an illustration about evangelism for Christians everywhere. Taken from The Way of the Master, Season Four, Mission: Europe, Prague. 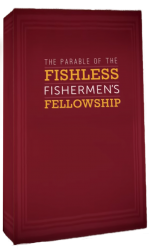 Want a print out of this video to read to your Sunday School or small group. We’ve converted into a short .pdf for you.

This is our second most important message.
Click Here

Save Yourself Some Pain

Do you live in America? Europe? Asia? Africa? Visit our other agency websites.

Living Waters exists to inspire and equip Christians to fulfil the Great Commission.

Partner with Living Waters Down Under